$15 suggested donation. No one will be turned away for lack of funds. 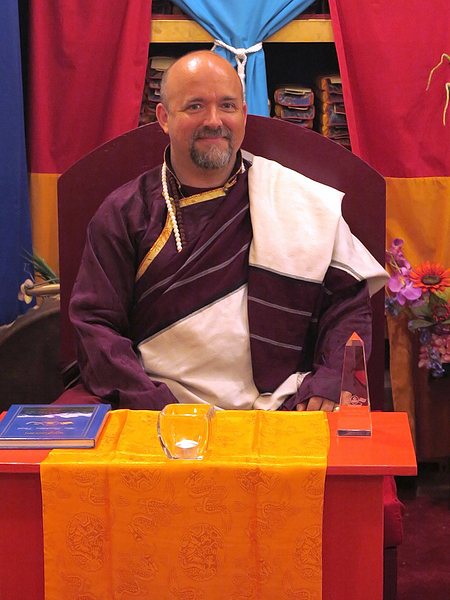 Jigme Lama aspires to embody the principle of inclusiveness, dedicating his life to practicing and teaching the Dharma and serving as President of the Dzogchen Shri Singha Foundation, while being a loving husband and father, and maintaining a career as a creative professional. Jigme Lama is currently supporting the publication of future editions of the Buddha Path and other texts and aspires to fulfill his teacher’s aspirations to help establish a stable Dharma system to promulgate the Dzogchen lineage throughout the world and benefit all beings.

The Dzogchen Shri Singha Foundation and Dzogchen Shri Singha of Salt Lake City are honored to announce the fourth annual Dzogchen Urban Spring Retreat in Salt Lake City from Saturday March 12, through Sunday March 13, 2016. Students will observe a full-time weekend schedule of from 9 am to 5 pm under the instruction of Venerable Archarya Jigme Lama Sean D. Young. The retreat will be centrally located at Wasatch Retreat and Conference Center in the Episcopal Church Center of Utah near downtown Salt Lake City. An urban retreat setting allows for deeper immersion into the study and practice of Tibetan Buddhism while allowing participants the convenience and comfort of lodging at their homes with families. The 2015 Dzogchen Urban Spring Retreat is designed to give students practical skills for coping with the stressors of modern life and for developing one’s innate love and compassion while bringing happiness to others. This year’s program is themed “Joyful Path, Joyful Result,” a simple and integrated approach towards integrating Buddhist principles into one’s daily activities surrounding work, family, and community.

$50 for both Saturday and Sunday, $35 for Saturday only.
To register or for more details, contact Joe: saltlakebuddhapath@gmail.com or 801-403-9880

Introduction to Buddhism classes
This spring, we are offering a series of classes that will focus on some key fundamental principles of Buddhism and introduce simple tools for transforming negative emotions, increasing one’s personal happiness and becoming a powerful condition for helping others. Each session will be an informal dharma discussion followed by short practice from The Buddha Path, a practice manual by Dzogchen Khenpo Choga Rinpoche. Classes are at The Yoga Center–4689 South 2300 East (Holladay Blvd) at 7:00-8:30 pm.

March 20: The Four Noble Truths of the Enlightened

May 15: Refuge is freedom–Buddha, Dharma and Sangha

Everyone is welcome. No previous experience required. Drop in for any class, or plan to attend all to deepen your practice. Suggested donation: $5.

This class will be taught by Joseph Evans (Orgyen Shiwo Dorje), who has been studying with Dzogchen Khenpo Choga Rinpoche for 11 years, and has completed more than five months of retreat in the Dzogchen Shri Singha lineage of Tibetan Buddhism.

Buddha Path practice schedule
For experienced Buddha Path practitioners: The local sangha meets at the SLC Main Library (conference room E, next to the children’s library downstairs, unless noted otherwise) from 1:30-3:00 pm on the 2nd and 4th Sundays of every month:
2/28 (conf. room A)
3/13 no practice (during Spring Retreat)
3/27 no practice (Easter holiday)
4/10
4/24
5/8 no practice (Mother’s day)
5/22
Please let us know if you plan to attend. saltlakebuddhapath@gmail.com